Can you recognize the differences between meltdowns and tantrums? 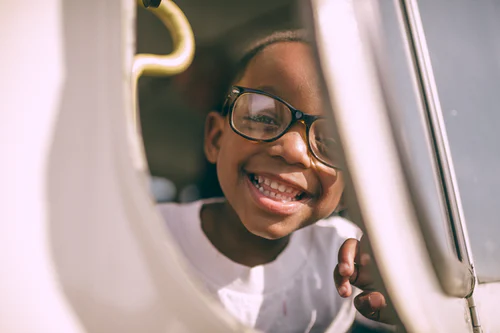 My first experience with a meltdown came right before bedtime with my then 1 year old autistic son. I was putting him down for the night and out of nowhere, he started bawling. I did a mental assessment of our surroundings. Was there something I was missing? The tv wasn’t on, so nothing could be scaring him. There was light in the room, all monsters vanished. He had been fed, changed, no new smells, nothing that I could see that would suggest that something was triggering his tears.

His tears and screams were hard. I didn’t know what to do so I did the only thing I could think to do. I held on to him tightly and I started signing his favorite song – the wheels on the bus.

It took awhile for him to calm down, but that instance moved me to seek out additional guidance. What happened couldn’t have been a regular old tantrum.  It just didn’t feel right.  My son was too young to communicate with me and even if he could, I’m sure he wouldn’t have understood.

What I learned was that my son would probably have several of these episodes throughout his life and that we would have to learn how to deal with what I now know as meltdowns, effectively.

Autism or Autism Spectrum Disorder is not a rarity.

According to the CDC, in 2016, 1 in every 54 kids in the U.S. were diagnosed with Autism Spectrum Disorder. Hence, it becomes crucial to understand what this disorder is about and the behavioral patterns of kids having this disorder.

Let’s explore what autism is, what are autism meltdowns, how meltdowns are different from tantrums, how to deal with meltdowns and tantrums in different situations, and finally what are the preventive measures that you can adopt to handle such meltdowns better.

Autism or Autism Spectrum Disorder (ASD) is a category of neurodevelopmental disorders. It is composed of a set of behavioral challenges and implies difficulty in social interactions. People having ASD, display a repetitive, restricted, and uncommon set of behaviors and interests. The understanding, learning, thinking, and problem-solving methodologies of such people are quite different from an average person.

Kids with autism sometimes find it difficult to understand what other people think and feel. Hence, it becomes a challenge for them to figure out how to express themselves through words, body movements, or facial expressions.

Autism can affect a person in varying degrees, the cause of which is dependent on a combination of environmental and genetic factors. But the signs and symptoms of autism appear as early as the ages of 2 or 3. Some of these include:

In our case, I started noticing little “quirks” when Sweetpea was a few weeks old. Autism wasn’t even on my radar at the time. He would just do things that I thought were “odd.”  I decided to discuss my concerns with our pediatrician, who at the time, was very receptive, but did not indicate that could be anything wrong. Some of the things I noticed were:

You may experience some, if not all of these signs. As Sweetpea started exhibiting more and more symptoms, it was evident that he may have autism. As he grew older, we were thrust into new territory. There were times he would “act up” and nothing we did would calm him down.  It felt like something more than just a tantrum because the outburst would come during an experience and not because of something he wanted.  This led to us discovering that meltdowns, as we learned, were common for autistic individuals.

What are Meltdowns in Autism?

As people with autism sometimes find it difficult to express themselves, they do it via a meltdown. A meltdown is an instant and intense reaction to something that they find overwhelming to deal with. It may happen because of harsh sounds, bright lights, irregular textures, bright colors, over-crowding of people, or when there is too much information to process for them.

Meltdowns vary in from a range of reactions in different people. The responses that autistic people display includes crying, biting, hitting, kicking, screaming, zoning out, staring at something, growling, curling up into a ball, etc.

How are Meltdowns different from Tantrums?

A temper tantrum can simply occur because a child is not getting what he/she wants.

All kids show this behavior when they don’t know how to deal with complex emotions in their developing phase. They are determined to meet their demands, and when those are not met, kids show their frustration in different ways. This frustration can be in the form of crying, screaming, kicking, dropping things, holding their breath, not talking, etc.

Temper tantrums happen because of various reasons and mostly goal-oriented. They occur when a kid is put under restrictions, and their goal is to break away from those restrictions.

For instance, it may happen when they are wanting to buy the ice-cream that you are denying them to have, or when they are not willing to go to their school.

A meltdown occurs when an autistic child or a person is overwhelmed.

All autistic kids and adults depict this behavior. They don’t know how to express themselves better when they come across different situations that are overwhelming for them. As a result, they can depict various responses that range from crying, screaming, kicking, staring into space, repeatedly rocking, curling into a ball, growling, etc.

Meltdowns are not goal-oriented like temper tantrums. They don’t happen because of wants or restrictions. Rather, they happen because of sudden and intense stimuli that they want to recover from but not know how to.

For instance, a person may put their hands on their ears, and cry when they feel the vacuum pressure building in their ears, while traveling via an airplane.

A meltdown occurs when there is too much sensory overload for kids as well as adults having autism. It is a way for them to process the overloading, and it is totally out of their control.

2. Tantrums (usually) only occur for kids. Meltdowns are prevalent in adulthood as well.

Tantrums are commonly associated with kids- although I’m sure many of us know an adult or two that throw tantrums as well as any kid! They occur when a kid is growing up and learning to deal with their emotions. Tantrums are for a short duration.

When kids start to grow up, they learn how to put forward their demands better and learn how to handle their emotions. Hence, tantrums become lesser and lesser when kids are growing up (hopefully).

Meltdowns never cease to occur even when a kid becomes an adult. Also, they can last for a longer time.

3. Tantrums are a showcase. Meltdowns are not.

Tantrums usually occur when a child does everything to gain attention to make their demands being heard.

Kids stop throwing a tantrum when their wants are fulfilled when their guardians ignore their tactics, or when they are taken away from the crowd they are showcasing their tantrums to. They can be stopped by a hug, time-outs, or treats.

How Can Parents Deal with Temper Tantrums?

While dealing with temper tantrums, every parent may have different ways to handle the situation. There is not an ideal way to deal with it, terming everything as ‘Black and White’. Once you start understanding your kid better, it will be easier for you to cope with such behaviors. But neither punishing your child every time nor rewarding them by falling in with their demands works long-term.

How Can Parents Deal with Meltdowns?

Not all kids with ASD have the same meltdowns. Hence, not all strategies mentioned here are going to work for you. You can try them out one by one and find out what works best for you.

How to Prevent Meltdowns?

ASD can be tiring and challenging for parents. But there are some measures you can take that will not allow meltdowns to happen frequently. Before I really understood what I was dealing with, I was constantly frustrated because I didn’t know what was wrong or how to help my baby.  All I could do was hold him, try to sooth him, and tell him I love him and it would be okay.

The first step is to understand your child and know what triggers the meltdown to occur.

Once you gather these little pieces of information, it becomes easier for you to understand your child’s behavioral pattern and use their favorite things to combat a meltdown. For instance, you can avoid taking your kid to an over-crowded market when you observe that they have a meltdown because of loud noise.

Once you become familiar with your child’s behavior, you can move on to the preventive measures.

Dealing with Meltdowns in Schools

You can’t be there with your child all the time. A school is a place where your kid will be prone to a lot of triggers. In such a situation, the teacher will have to deal with the meltdowns and take your role.

Hence, it becomes crucial for you to inform the teacher about the behavioral patterns and share as much as you can about the calming methods.

Tips for dealing with meltdowns in schools:

Dealing with Meltdowns Before Bedtime

After getting exhausted by a long series of meltdowns your kid may find it difficult to sleep in peace.

Here are a few tips to deal with meltdowns before bedtime:

Tantrums and Meltdowns are two different terms. But in handling both of them, the approach remains similar. The way to deal with these is by understanding your child and their behaviors. When dealing with tantrums, acknowledge what your kid wants without giving in to their tactics. If they want one more scoop of that ice-cream instantly, tell them they can have it after dinner. Similarly, to handle a meltdown, be aware and remove the trigger, or take them to a quieter place to process whatever happened. Reassure your child that everything’s alright.

Every kid throws some tantrums or the other. Some of them have meltdowns as well. Knowing the thin line between the two, and accordingly taking measures, is the key to deal with both tantrums and meltdowns without getting exhausted.

What meltdowns have you experienced with your child?  What worked for you? Share your story below!

Why don’t you subscribe? When I have something important to say, you’ll be the first to know.